As we’ve discussed before, writing a script is best approached with serious forethought and planning. By the time you sit down and fade in, you’ll ideally have a synopsis, beat sheet, and treatment to serve as keystones for the finished product. Even with all of this prep work, it can still be easy to get lost in your work once the writing process begins. This isn’t a bad thing: one of the best feelings in screenwriting is slipping into “the zone,” plugging away at the keyboard, watching the pages fly by,  and losing track of time. This is often where your best work materializes.

However, once you snap out of it and realize that should have been in bed hours ago, there’s no easy way to quickly analyze the makeup of what you just wrote. How many scenes was that? How many new settings or characters have I introduced? How are the elements balancing out in the big picture? How long was I writing? Am I on schedule?

With the introduction of our new Insights feature, we answer all these questions for you – in real time. Insights is a script analytics and performance tracking tool built into your Celtx script editor, which allows you to set writing goals and track your progress, understand the practical details of your writing habits, and graphically visualize the content of your script as it develops.

Insights dynamically captures all of the details of your writing, allowing you to concentrate on creating  while being only a click away from the finer points of the process. It helps to keep you motivated and on schedule, and provides an engaging and genuinely fun opportunity to watch how your project evolves – all the way from the first scene to the final draft.

To celebrate the release of Insights and to demonstrate how in-depth it can go, we took it for a test drive using seven iconic screenplays. If you’ve ever wanted to see how the elements of your favorite movie scripts add up, we’ve got you covered. Check it out! 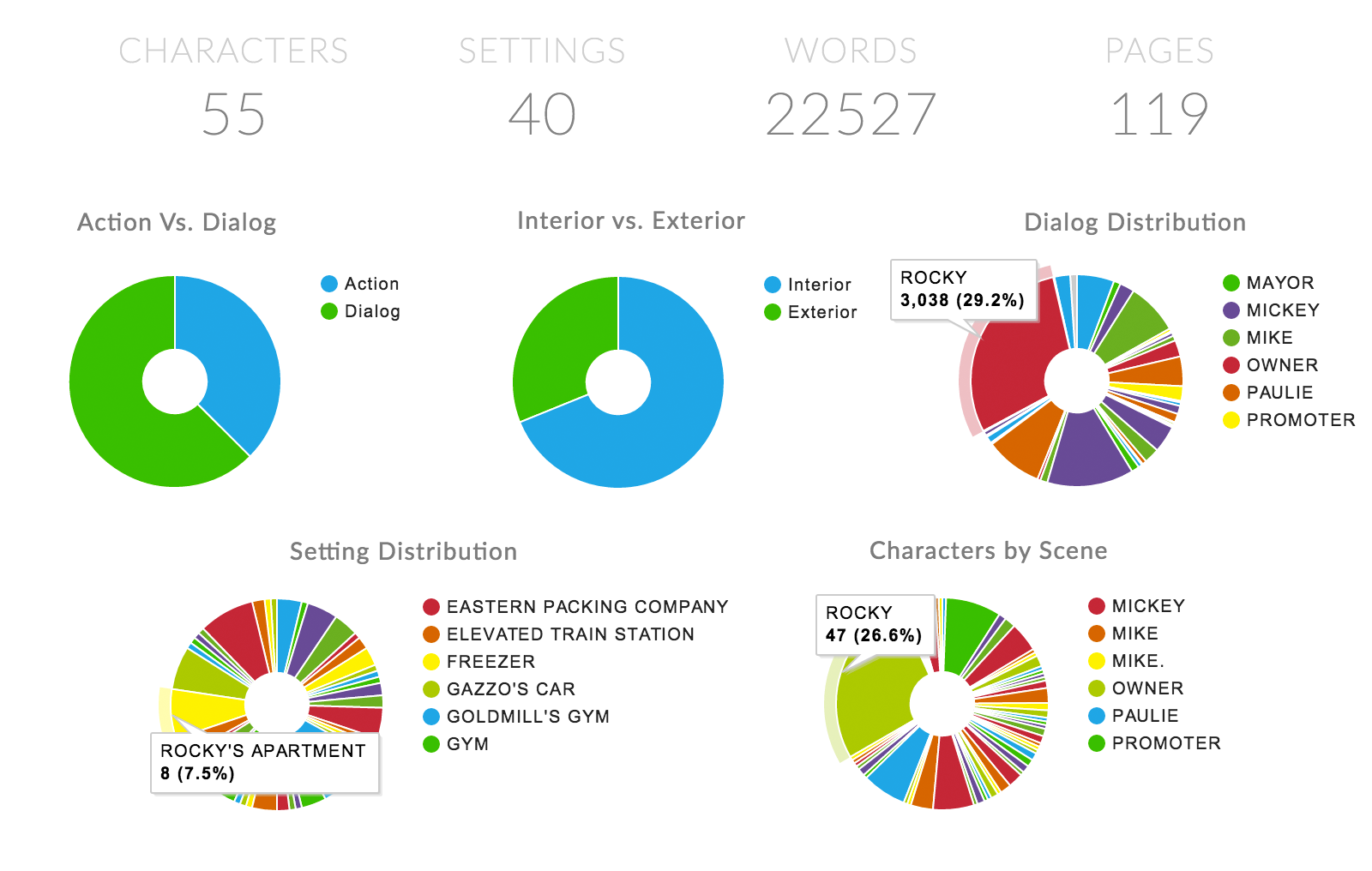 Sylvester Stallone’s classic underdog story was nominated for best original screenplay at the 1977 Academy Awards. It’s an earnest, heartfelt, and deceptively pragmatic script that brought the sports genre into blockbuster territory. Not bad for a first feature. 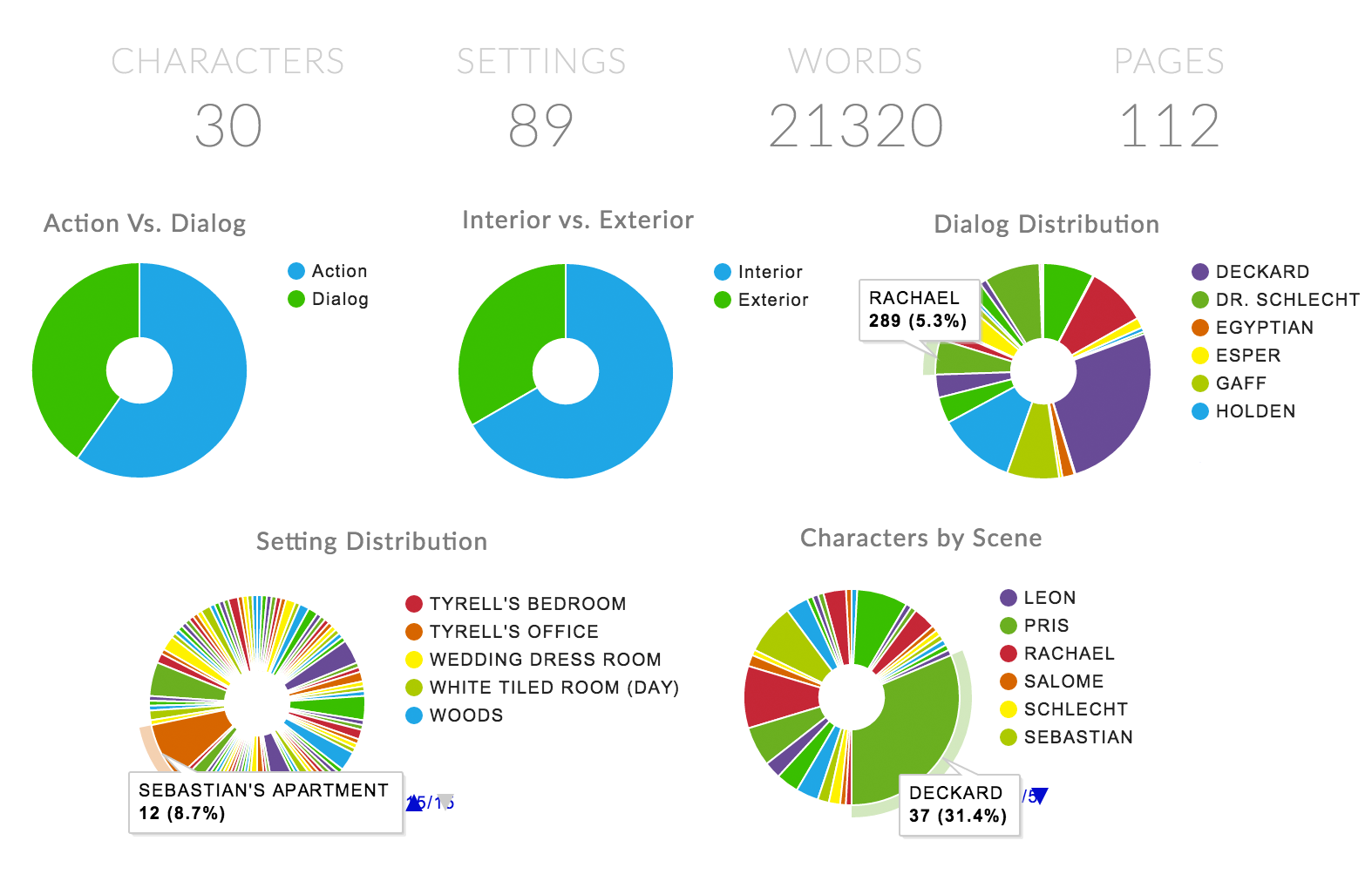 Synonymous with “ahead of its time,” Peoples’ and Fancher’s adaptation of Phillip K. Dick’s novel Do Androids Dream Of Electric Sheep? brought the science fiction genre out of the squeaky psychedelia of the 1970s and into a vividly realized, eerily prescient realm of cyberpunk noir.

Intense, inventive, and unabashedly serious – Terminator 2 needs little introduction. A landmark script that became a serious contender for the greatest action film ever made. 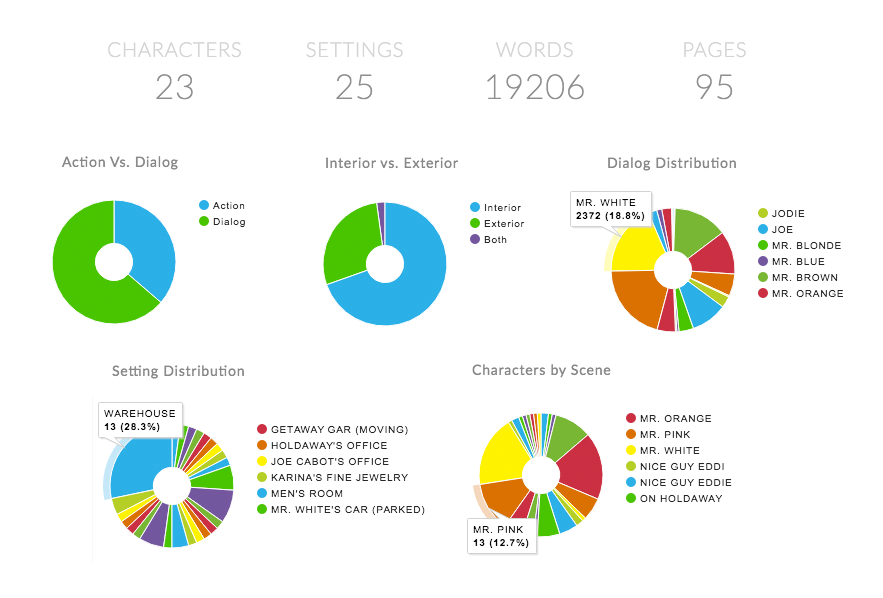 Tarantino’s breakout script about a diamond heist gone awry is a tight, breezy work that combines spirited pop culture obsession with hard-boiled genre tropes. Often imitated, this is the script that made working at a video store seem like a hip alternative to film school. 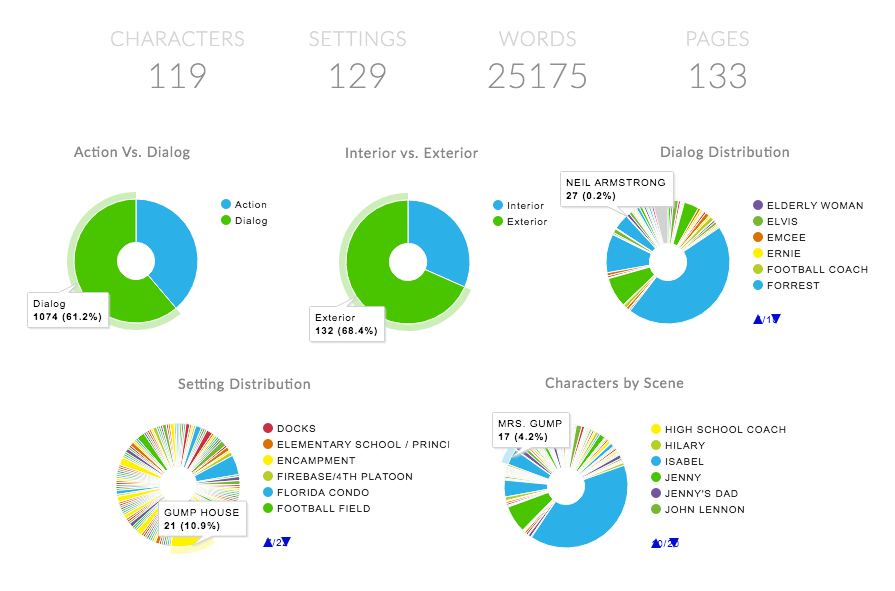 Everybody’s favorite Sunday afternoon movie, Forrest Gump is a fascinating read for any screenwriter. While its folksy, mawkish sentimentality is easy to dismiss, its a masterclass in tackling a huge, complicated story without losing your center (or entering epic page count territory). 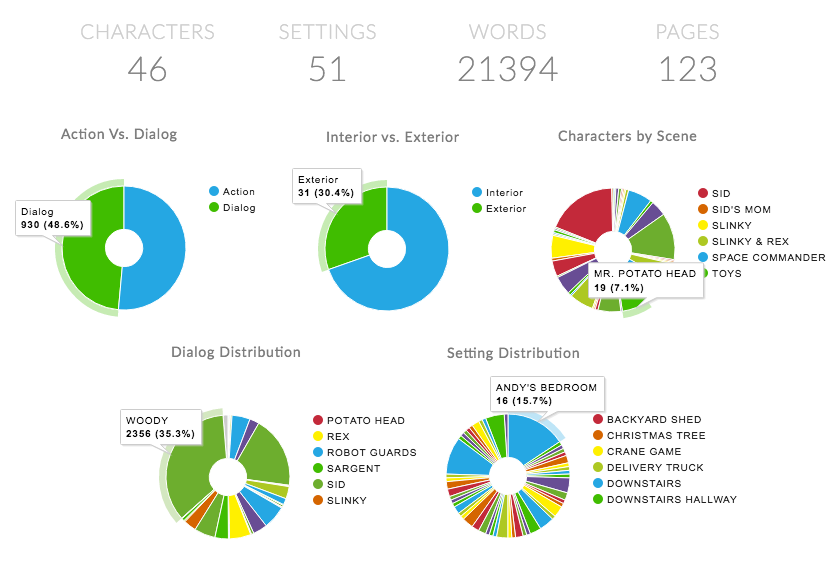 The script that put Pixar on the map and made family movies genuinely enjoyable for both the young and old. Toy Story takes the sunny, cheerful veneer of a children’s story and combines it with winking, cultivated maturity (and a lot of universal humor).

Insight is now live in the script editor. Sign in and give it a shot! We’re confident that it will make your writing process that much more effective, efficient, and fun.