When you’ve finished and finalized the draft of your script that you plan to take to camera, what you’ve got in your hand what’s referred to as a Production White. This is the version of the script that will be distributed to all members of your cast and crew to begin the in-depth process of breaking it down into an executable production plan.  Even if your Production White is the product of months of thoughtful editing and revision, it’s almost certainly going to change even more as you move into the pre-production phase and eventually start shooting.

Try the Celtx Script Writing Software to Write, Breakdown and Revise Your Scripts.

As the old adage goes, a film or video shoot is a state of controlled chaos. Things go wrong, plans get cancelled, stuff breaks, and budgets run dry.  Shooting scripts are guaranteed to change – constantly. This isn’t to say that the grand sweep of the story will be constantly shifting (although it does happen on occasion). The most common changes are things like tweaking lines, omitting scenes (or adding new ones), changing scene locations, and trimming action. It’s a constant game of catch-up and refinement to make the script workable with the context of your shooting situation. On some productions, it isn’t unheard for a new script revision to issued every day.

The most important part of revising a production script is keeping all of the existing material on the same pages. Once a script is “locked” (i.e. ready for shooting), any changes made to it have to be tracked on the page itself without disrupting the scene numbers. Additionally, pages that have been revised need to be differentiated from those that have not. Here’s how it works:

Every time a script is revised, the revision is assigned a color. The number and types of colors used vary from production to production, but you can expect at least five after the initial production white (usually in the order of blue, pink, yellow, green, & goldenrod). Some productions will have as many as twelve revision colors, including some rather idiosyncratic ones like ‘buff’ and ‘lavender’. Generally, blue through goldenrod will suffice. If you run out of colors, the best practice is go back to the start of the color cycle for your next revision, i.e. Goldenrod -> Double White -> Double Blue, ad infitinum (although the odds of you hitting Centuple Pink are unlikely).

This is where the action happens. Whenever something is added to or removed from a script, the integrity of the scene numbers and page numbers for everything that is unchanged has to be maintained. Otherwise, adding a new scene at the beginning of your script would roll over the scene numbers for everything that follows it. Likewise, adding new material that goes into a new page would disrupt the page count. If things like this happen in the middle of production, it makes work for your script supervisor, A.D’s, and anyone else who’s been referencing the script from day one much more difficult.

To prevent this, a simple formatting guidelines are used to handle adding and removing scenes, or altering text and dialogue. If a scene is deleted, it is replaced with an OMITTED, but it’s scene number remains in place. If a new scene is added, its scene number will reference the scene number immediately preceding it. So, a new scene added between scenes 2 and 3 will become scene 2A. A scene added between 2A and 3 will become 2B, and so on. When changes are made to existing text or dialogue, the affected line is marked with an asterisk in the page margin. This makes it easy for the reader to isolate what’s new or different on the revised page. 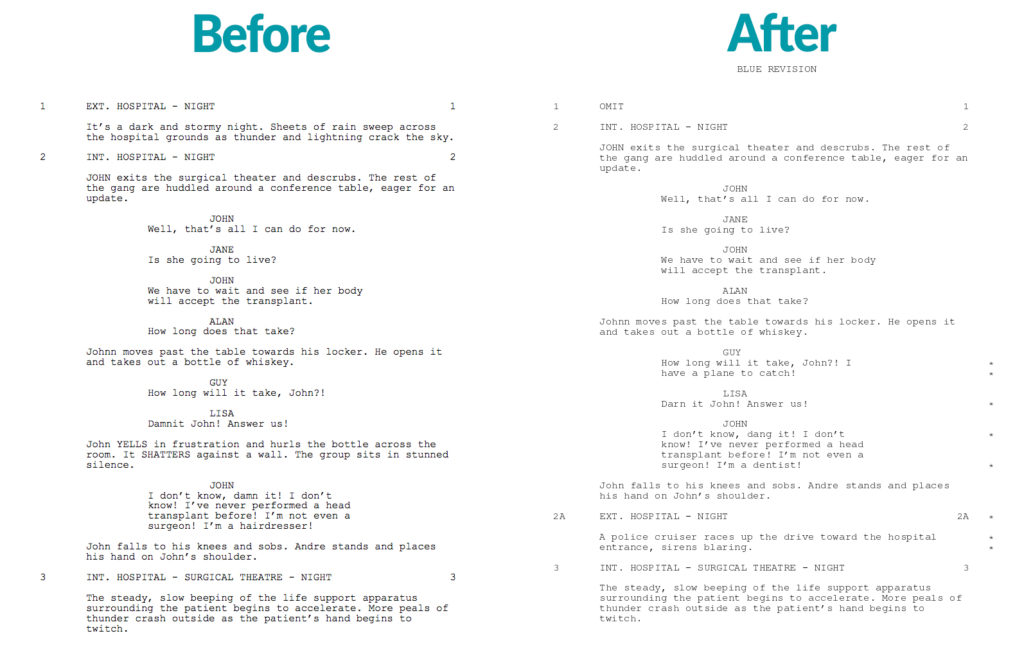 Your Celtx Studio’s script editor features a built-in revision mode function that allows you to easily create and track customized script revisions, then instantly share them with your production team, cast, and crew . Check out the video below for more information, and sign up for a Celtx account to give it a try.