Whether you’re writing a feature or a commercial, you will be writing action. To be clear, ‘action’ doesn’t simply mean fistfights and car chases (although we can all agree that those are the most fun), it describes everything that moves on your page: leaves blowing down the street, the manner in which your characters carry themselves, or a parenthetical tick that punctuates a monologue.

Your primary duties as a scriptwriter are to both captivate and to constantly propel the story or idea forward. If the space between the dialogue is rote and non-evocative, it will make it challenging for your production team to imagine your story on the screen. They won’t see a movie – they’ll see a transcript.

To avoid this, here are four tips you can keep in mind when you tackle your next project:

But before getting started, practice writing your next script in the Celtx script editor to make it automatically format to Hollywood standard.

ONE: Shorter Is Better

Much like the rules that apply to scene and character description, you don’t want your action to approach paragraph length unless it is absolutely necessary. A general rule is to never go more than four lines without a break. This is because large, unbroken chunks of text will disrupt your pacing and smother the details. When you’re writing, try to imagine the reader’s eye moving across the page, and approximate the amount of detail that you dispense to the rate at which a person could conceivably absorb that information if it was up on the screen.

This is the basis of the classic “one page equals one minute” rule, and while it is tricky at first, with practice you’ll have your readers absorbed and flying through your script, which is exactly where you want them – doubly so if the reader is a client.

This is an extension of the previous rule. Just as your director or cinematographer’s canvas is the screen, your canvas is the page. This doesn’t apply only to the words you choose, but the way that you present them spatially. Consider this excerpt from Dan Gilroy’s Oscar nominated script for Nightcrawler: 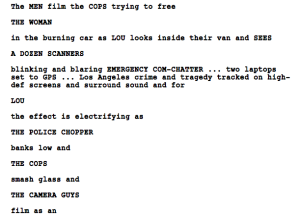 Gilroy brilliantly disperses his action and creates a physical tempo on the page itself, leading your eye through the scene in staccato bursts. The writing is as frenetic as the chaos it describes, putting you right in the middle of the action and giving you little room to drift away. Your execution doesn’t need to be as pared down or experimental as Gilroy’s, but it’s a great illustration of how the structure of the text itself can be harnessed for dramatic effect.

THREE: Verbs Are Your Friends

So get to know them, and think carefully about the ones you use. There are many different ways of saying the same thing, and the nuance you give to your language can make a big difference in how your action lands in the reader’s mind – and also save space on the page. Is a person running fast or are they sprinting? Is someone crying heavily or are they sobbing? Is the engine of the car growling or rumbling?

This isn’t to suggest that you replace every instance of “walks” in your script with “traipses” or “ambles.” Sometimes simplicity is better, and sometimes it isn’t. The point is to gauge yourself appropriately and keep in mind whether the words you chose to construct your action are bogging it down or amplifying it.

FOUR: Direct From Your Voice, Not From The Page

A common mistake that scriptwriters make is a tendency towards ‘directing from the page,’ which refers to dictating camera position, camera movement, and framing within their scenes. Unless you’re writing something that you intend to direct yourself, it’s best to avoid this (even if you are planning to direct it yourself, it’s best to avoid it in your first draft). Always strive to let your writing speak for itself, and adhere to the old adage of “show, don’t tell.” Don’t try to do your director’s job for them.

However, there’s still plenty of room for you to build a cinematic vision within your action. You just need to be a bit more subtle about it. Here’s another Dan Gilroy excerpt, this time from The Bourne Identity: 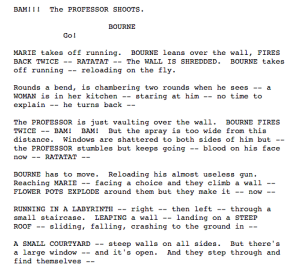 There’s no page direction here, but it provides a cinematic plan nonetheless. You’re seeing the shots in your head without really thinking about it, purely because of the voice in which Gilroy presents his action: the sentence breaks are subconscious cuts. The repeated, dominant use of “and” and “now” trigger changes of perspective and suggest a sense of constant motion. The capitalized sonic cues and character actions immediately suggest “close up” and “establish.” There’s an entire storyboard here that jumps off the page and right into the mind’s eye.

Such is the power of precise word choice, applied brevity, and textual structure. Keeping these pointers in mind will allow you to utilize these powers for the benefit of your entire production team. The script is the keystone of any project – make it as strong as you can.

Let Celtx Help You Write Your Next Sceenplay

Writing as a Hobby: Tips and Advice for...