Home About Celtx Learning Series Lesson #6: Breaking Down Your Script
About Celtx

Welcome back! By the end of lesson five, you should be looking at a complete first draft of your screenplay.  The pre-production process, however, is only beginning! For Producers and Assistant Directors, it’s time to get to the heart of the project by determining everything that the script calls for. This is called the breakdown, and it’s an exhaustive process – don’t worry though, Celtx makes it easy (really).

Whether it’s for a funding application, a pitch, or to prepare for a greenlit shoot, the breakdown takes a magnifying glass to all the practical aspects of a finished script. You need to identify, qualify, and quantify every location, prop, set, makeup effect, stunt, and more.

By completing this process in depth, you’ll end up with a functional index of everything you’ll need to buy, rent,  build, or borrow to film your script – along with when these assets are required on a scene-by-scene basis. Using Celtx makes this a lot less grueling.

The purpose of the Breakdown is to get an up-close view of what is actually needed to make a production work; the nuts and bolts. You’ll need to catalog every major item in your script, for each department involved in the project.

Your first pass of your script will mean identifying the more obvious items in the script, cataloging them, and making sure they’re accounted for in each scene. This process is done scene by scene.

The first big-ticket categories to identify are:

It’s important to read and know your script from beginning to end before you even start this process. This is to fully understand the context in which items appear  – they might not receive a full description until later in the script, or something might happen to them that changes their characteristics (ex: a car that crashes later in the story might need duplicates, which can impact your planning).

Items that are assumed to be in a scene and are therefore not identified in the breakdown become the silent killers of continuity. Reading through the script scene by scene will help you catch things that aren’t mentioned in the text directly.

For example, there could be a chase scene spanning multiple locations where character is carrying a backpack. This might appear in your script as multiple scenes or locations, meaning you may not film it in a single day. You’ll want to tag that backpack in every component scene, even if it isn’t mentioned, to make sure the props department remembers to bring it for each day that it’s needed.

Another way to track continuity for your departments is to keep track of the Dramatic Day your scenes take place on. Many stories will take place over multiple days, meaning characters might change wardrobe, makeup, or hairstyles depending on the day.

A good rule to keep in mind is that if scenes go from Day to Night, it’s likely the same day, however if they go from Night to Day, you can probably start a new Dramatic Day.

A quick note on Flashbacks: If your script notes a flashback or jump to a time period outside the norm of the rest of the story, it should be noted in both the scene heading and in the dramatic day.

Since Celtx’s Dramatic Day field can be filled with any number, as well as decimals, you can use it to note flashbacks by including items like 1984.1 to indicate the year, and day 1 if necessary.

Let’s practice using the Celtx breakdown module. Import this script to your Studio to create a new project.

Open up the breakdown module and take a look at the first scene. You’ll note that JANE has already been added to your sidebar, since she speaks in the scene. Great! One less thing to worry about.

Let’s start by tagging all the props we’ll need. Highlight “Key Ring” with your mouse. Then, in the resulting window, select the category “Props” and hit OK. You’ll notice a New Category on the left sidebar for Props.

Use this same technique to tag all the props in this scene. You should find:

You don’t need to tag multiple occurrences of the same word in a scene, just the first time it appears. If, in later scenes, the same prop appears, then tag it again, but use the Existing Items field so you don’t create duplicate catalog items.

Next, go through and select the Welcome Mat. Let’s add this to the Set Dressing category.

Now, In the top left, let’s add a scene summary. Click into the text field and add “Jane arrives home and discovers a key.” After that, select the Dramatic Day field at the bottom of the scene and enter ‘1’. 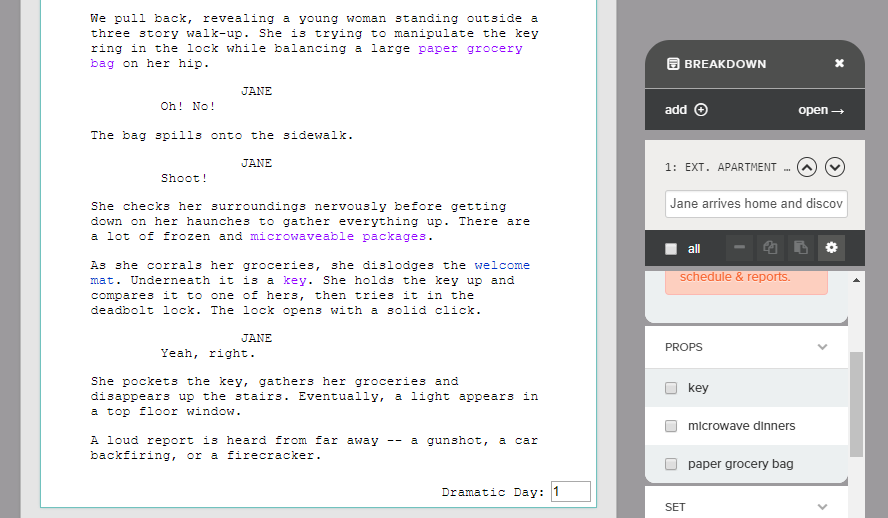 That’s one scene down. Time to do the rest!

By the time you finish your initial breakdown pass, your Studio’s production catalog will be filled with all the various assets that you have created. In the catalog, you can start filling out additional descriptive, budgeting, and sourcing data for all of them.

Once you move on to scheduling, you’ll this information will be used to generate automatic breakdown sheets for every shooting day.

Keep in mind that your breakdown will grow in complexity the further you go in your pre-production process. Once you’ve secured shooting locations and sets, the breakdown module can be used to assign them to specific scenes.

Completing your breakdown is the first major step in your pre-production process. By following the principles of knowing your script content and keeping continuity in mind, you’ll end up with a real sense of the scope of what you’ll need to execute your shoot.

You’re also laying the groundwork for the rest of your Celtx production cycle.  The data that you create in the breakdown module will streamline and accelerate the creation  rest of your pre-production documents, including your catalog, budget, shooting schedule, and daily reports.