No matter what kind of content you’re producing, there are cinematic hallmarks that everybody wants to see. Our new Production Primer series will cover the fundamentals of these techniques and show you what your team needs to consider when writing, planning, and shooting them.

The tracking shot or “oner” is perhaps the most iconic and captivating of all cinematic techniques. Generally speaking, it refers graceful, uninterrupted single-take shots where the camera follows the subject throughout either an extended portion or the entirety of a scene. Tracking shots are a showcase opportunity for the entire production team to demonstrate their technical expertise, but come with a price: they require extensive planning and rehearsal to execute properly. If all goes according to plan, however, the effect is mesmerizing (and you’ve successfully added a cinematic flourish to your project that captures the imagination and sticks to the memory). If you’re thinking about attempting a tracking shot in your next project, here are a few things to consider for each phase of production.

One of the most celebrated tracking shots of all time is the famous Copacabana Sequence from Martin Scorsese’s Goodfellas. The dazzling, impeccably staged journey of Henry Hill and his date from across the street, down the stairs, winding through the service corridors and kitchen, and finally out onto the floor of the iconic nightclub became an instant classic of American cinema. Every cue is fits together so flawlessly that it’s easy for one to assume that the some serious technical rigor was applied during the writing process. Surprisingly, this doesn’t appear to be the case. Here’s how the Copacabana Sequence appeared on the page in a revised draft of Nicholas Pileggi & Martin Scorsese’s 1989 script. Compare it to the end result.

Are You Interested in Writing a Script of Your Own? If so, look no further then Celtx’s Free Script Editor. 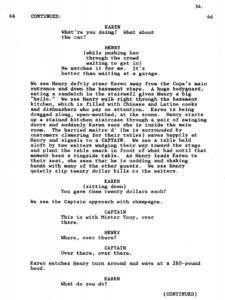 As you can see, on paper this sequence is written like an unformatted montage. Virtually all of the asides and interactions that Henry has during his entrance are conspicuously absent, as are any specific shots or camera directions. According to Director of Photography Michael Ballhaus, Scorsese had fleshed out the entire sequence in his head, and the entire thing was blocked, rehearsed, and shot in less than a day. Unfortunately, most of us aren’t Martin Scorsese.

The more preparation and thought you put into the writing of the big scene, the greater footing your director and camera department will have when your team arrives at the planning phase. The Copacabana excerpt is a great example of how you should start: the telegraphic action suggests uninterrupted movement and the physical geography of the scene is explicated without being too specific. Moreover, the truncated and condensed formatting prevents the sequence from disrupting the flow of the script. If it were written exactly as it was shot, the sequence would have taken up multiple pages as opposed to roughly one half. In Celtx, however, there’s a novel solution that allows you to have it both ways.

If there’s a scene in your script that you think would make for the perfect tracking shot, Celtx allows you to develop it in detail outside of the script but within the same project. By adding an additional A/V Script to your project specifically for your tracking shot, you can create an in-depth, tailored shooting script describing every action point in your sequence. It also has multiple output formats, one for your actors to work on their cues, and another for your camera department to start mapping out the shot plan. Here’s what the Copacabana sequence looks like when written in A/V format: 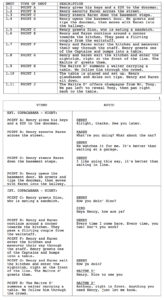 A stabilization system is essential to executing a tracking shot. There are two standard options: a dolly, or a steadicam. A dolly is a heavy, wheeled multi-operator camera platform designed to move along the horizontal axis, either on tracks  or on an appropriately smooth surface. A steadicam utilizes a mechanical system of gimbals and counterweights to allow a single operator to smoothly move and manipulate a camera with considerable deftness and speed. Where a dolly offers extremely stable and precise shots, steadicams allow for much greater mobility and a dreamy ‘floating’ effect. Both systems are fairly expensive and require skilled operators, although various ‘lighter’ or DIY solutions do exist. When choosing your stabilization system, two factors are key: the location in which you’ll be shooting, and the kind of action you need the camera to capture.  For example, in the Copacabana sequence, the camera was required to closely follow the subjects up and down stairs, down narrow hallways, around sharp corners, and through crowds of background actors with several sidesteps and sudden stops. In this case, the steadicam was the ideal solution. 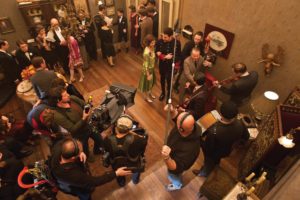 When you have a suitable location secured, take a walkthrough with your team and make note of obstacles, staging areas, and wiggle room for maneuvering crew and setting up equipment. Determine which stabilization system would best fit your needs, and then perform the initial blocking of your sequence and determine the best positions for each action point to take place. Celtx provides a useful tool for this stage in the form of the Shot Blocker.  You can use the Shot Blocker to sketch out your location and specify where you want your action points to happen while plotting the path of the camera. You can also use it to set positions for equipment, props, set dressing, and extras using a built-in clipart library. Here’s what a shot plan for the Copacabana sequence might look like: 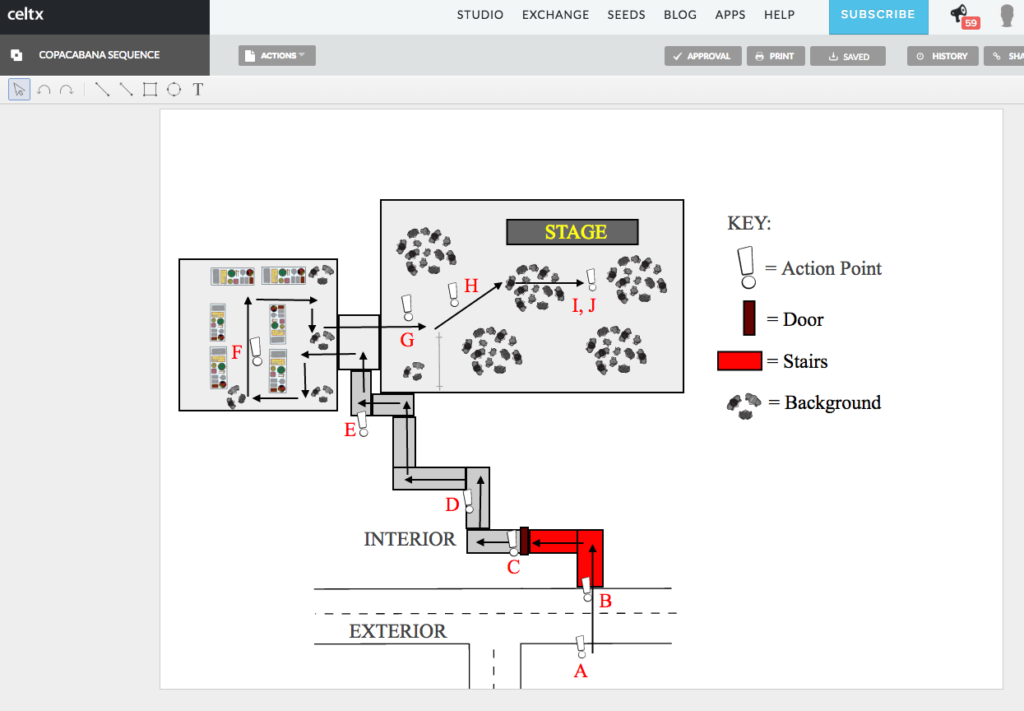 Rehearse, rehearse, rehearse. Have your director move through your existing shot plan with your actors and let them get a feel for the space. Talk to them, and be open to improvisation. Long tracking sequences are akin to live theater, and its very easy for them to be overcome by a sense of staginess. Giving your actors a chance to explore, ad lib, and make mistakes can provide additional material that will imbue your sequence with a greater sense of reality.

You might also consider doing this initial blocking pass in reverse, starting at your last action point and working backwards. Ensuring that your actors know exactly where they need to end up is crucial to getting the perfect take, and starting your rehearsal from the final blocking position makes it easier for your actors to judge both distance and timings throughout the rest of the sequence: the finishing point is far more important than the starting point.

Depending on the length of your shot (and if your schedule can accommodate it), you might want to consider blocking an entire day for setup and rehearsals. Either way, something is bound to deviate from your plan. Multiple takes are a given (it almost never goes right on the first try), but remember to be conscientious of the physical limitations of your cast and crew. If you push them too hard, you might start to undo the progress you’ve made in rehearsal.

In conclusion, be deliberate in your writing, thoughtful and thorough in your planning, and ready to drill when the shoot day arrives. To take advantage of the tools described in this primer, head over to Celtx and set up your team with a free trial. You’ll find that it makes keeping everyone informed and engaged during both the pre-production process and on set that much easier.

How to Manage a Film Budget [Top Sheet...

What is a Call Sheet? Abbreviations, Screenshots &...