Screenplay Formatting: Breaking Down the Elements

Scripts are bound by some of the strictest formatting guidelines of any written medium. Think of them like legal documents – discrepancies can render them inadmissible. Coverage readers (the people who review spec scripts that are submitted  to production companies) are likely to toss a script in the garbage if there’s spelling or grammar mistakes on the first page. You can imagine what they’d think of an improperly formatted scene heading.

Screenplay formatting is not arbitrary. Scripts as we read them today a product of decades of development and fine tuning. The objective of screenplay formatting is to ensure that the information that is critical to conceptualizing how the film will be shot is displayed prominently and clearly on the page, as well as making the content of your story easy to parse and isolate for editing.

If you want to write a properly formatted script, you have two options: 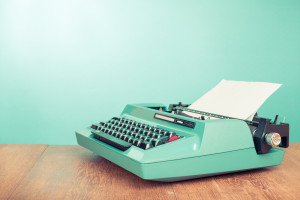 Use a script editor – Try out Celtx Screenplay Formatter Here 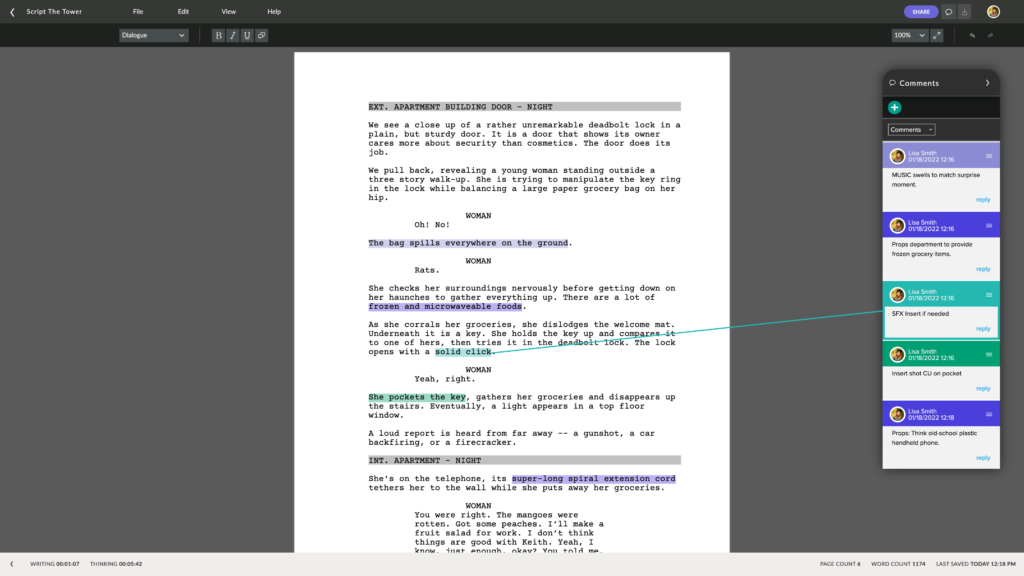 Celtx’s is fully featured, free, and integrated with a suite of planning tools that make writing, editing, and expanding your script into a production a fast and fluid process. Celtx’s script editor handles the formatting automatically, and will intuitively guide you to the next logical element position on the page.

However, just because something is done automatically doesn’t mean that it’s not worth understanding. It’s crucial to know what each formatting element means, and understand how they can be manipulated to write more complex scenes. The following will break down the basics and show you a few different alternative approaches that you can use to make your script read properly.

Scene headings denote the time and place where a scene takes place. The first part of a scene heading specifies whether it is inside our outside, written as ‘INT’. or ‘EXT.’ (Interior or Exterior).  If a scene is taking place both inside and outside, you can write ‘INT. / EXT.’.  The second part of your scene heading will refer to the setting – a house, a plane, a farm, whatever. Just make sure its capitalized. The third part will specify time of day, usually in relation to the prevailing lighting conditions that you envision. ‘DAY’ and ‘NIGHT’ are the most common, but you can use more specific words, i.e. ‘AFTERNOON’ or ‘DUSK’.
A properly formatted scene heading should look like this:

If you wish to add more elements to your scene heading, such as shot types or subjects, separate them with a dash. A good rule of thumb is to go from general to specific in terms of these elements, for example:

The shot element allows you to specify a subject within your scene, guiding the reader’s perspective. Shots are always capitalized, and separated from the action by a line break. For example:

A common method of being more specific with your shot lines is to use phrases like ‘ANGLE ON‘ or ‘CLOSE ON’ to preface the subject of the shot. Avoid using too many articles in your shot descriptions – try to make them as short as possible.
Shots can also be used to specify on-screen text, such as superimpositions. For example:

The meat of your script, action describes everything that is happening within a scene outside of dialog. Action is written in standard paragraphical format, albeit with a few quirks. The most important quirks are the rules surrounding capitalization. There are three things that, as a rule, should always be capitalized in a piece of action: the initial appearance of a character with dialogue, sound effects (and, if present, the objects producing the sound), and camera directions.
For example:

If a character is not on screen but the source of their dialog is, such as a telephone or radio, or if the dialog is narration, then you specify it as Voice Over, like so:

Parenthetical direction is inserted into dialog to describe what a character is doing while they speak, or how they are speaking. They should not include punctuation nor should they be capitalized. Try to keep them short, telegraphically written, and if you are describing multiple actions you should link them together with semicolons. Never end a piece of dialog with a parenthetical. For example:

Transitions describe how each scene leads into the next. We all know the standard ‘FADE IN:’ and ‘FADE OUT’. These kinds of transitions are largely anachronistic in contemporary screenwriting. Describing cuts, however,  are not. In previous articles we talked about how ‘directing from the page’ should be reserved for production drafts with input from the director, but the careful use of specifying cuts can add great tempo and impact to your scenes.  Common cuts include ‘CUT TO BLACK’, ‘SMASH CUT’, ‘TIME CUT’, and ‘MATCH CUT’. For example:

Remember, there’s much more to screenplay formatting than is described here, but these basics provide  a solid foundation. The best way to study the full complexity of formatting is to read some scripts yourselves. The Black List’s official blog currently hosts some great resources in this department, including the most recent round of nominated screenplays from the 2020 Oscars.

How to Write a Script for TV (Beginner’s...

How to Write a Screenplay – 9 Amazing...

How to Format a Script | A Screenplay...

How to Write a Script for a Short...