Home Learning How To Break Down Your Script
Learning

How To Break Down Your Script

Filmmaking requires a heavily detail-oriented approach from the outset. Anything that the script calls for needs to be qualified, thought through, and planned out before you go to camera. If you find yourself trying to figure out what props or special equipment are needed to execute a particular scene by the time you’re on set, you’re going to be burning daylight (and money).

This process begins with the script breakdown.

To get started on your journey of learning how to break down a script, create a Celtx account here today (for free) and follow along as you learn.

Breaking down your script is a meticulous and crucial aspect of pre-production. Typically handled by the 1st A.D. in tandem with the Director, the breakdown process involves going through the entire script, line by line, and identifying all the different elements that need to be accounted for.

In Celtx, we make this a simple point-and-click process. Our Breakdown module isolates your script in to scenes, and allows you to highlight, color-code, and tag different elements to assign them to the appropriate categories.

What distinguishes our system from others is the fact that every breakdown item you create is automatically organized in your Production Catalog where additional information can be added to them as the pre-production process moves towards completion. Best of all,  it’s easy for you and members of your team to return to the module to make changes and add additional breakdown items – as you will see, the more complex a scene gets and the closer you get to camera, you’ll have to learn how to qualify what is not on the page as much as what is.

Celtx’s Breakdown Module contains 41 default element categories that cover pretty much everything you’d expect to encounter on a film set. As opposed to defining each category, we’re going to take you through a breakdown of a big, complicated scene to give you a better sense of the intricacies of deciding what category should be applied where, and when you’ll have to create breakdown items that don’t appear in the script.

We’ll be using the fantastic opening fight scene from 2017’s Logan, the script for which was generously distributed for public consumption during this year’s Academy Awards season. We recommend you read the scene before we press on. To do so,  click here. 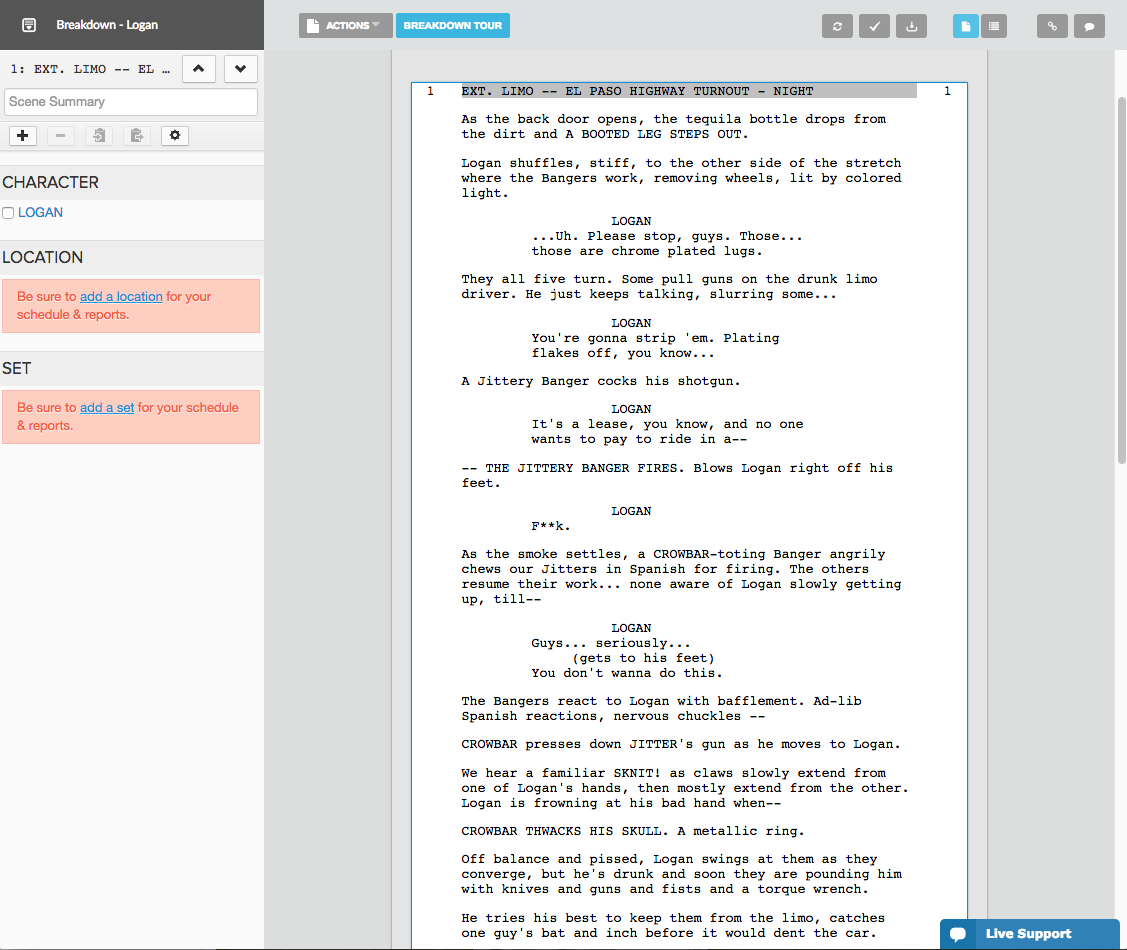 When you open your script for the first time in the Breakdown module, you’ll see something similar to the image above. The currently selected scene is indicated by a blue outline, and you can navigate between scenes by scrolling and clicking or using the arrow buttons at the top of the breakdown menu. You’ll notice that the ‘Location’ and ‘Set’ categories are currently blank. When you get close to your start date and have established where you’ll be shooting, you can create catalog items for your locations/sets and use the Breakdown Module to associate them with scenes. This information will automatically carry over to your Schedule and auto-populate your Stripboard.

You’ll also notice in this case that one character (Logan) has already been tagged as a breakdown item. In Celtx, any character with associated dialogue is automatically tagged as soon as the module is opened. But what about characters without dialogue? Let’s look a little closer. 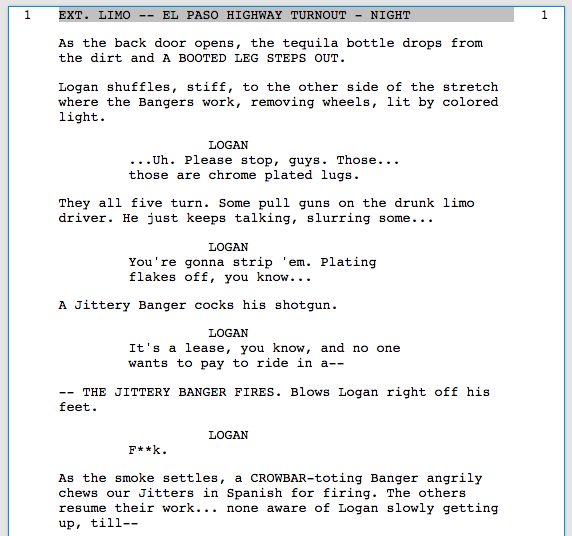 After Logan is established, we’re presented with a group of five “bangers”. If these characters were merely hanging out and not interacting with Logan, they’d likely be tagged as one item under ‘Extras.’ However, as we can see, trouble is brewing. One of the bangers approaches Logan with a shotgun. Here, the writer distinguishes him from the other bangers by describing him as “jittery”. In scenes where a character has to deal with a group of assailants, this is a great way to give them proper character names – base it on quirks and weapons of choice.

So, the writer distinguishes two of the bangers as Jitters and Crowbar. We can tag them as such off the bat. What about the other three? Well, the scene describes one as getting gored in the neck,  another as being kicked into the back of an open van, and another as the driver. So, we can call them Neckwound, Football, and Wheelman. Depending on the specificity of the actions associated with Nameless Goon-type characters, you can get away with a simple Bad Guys #1-#5 setup, but using a little creativity to give them a nickname that reflects what will happen to them can make the stunt coordinating process easier. 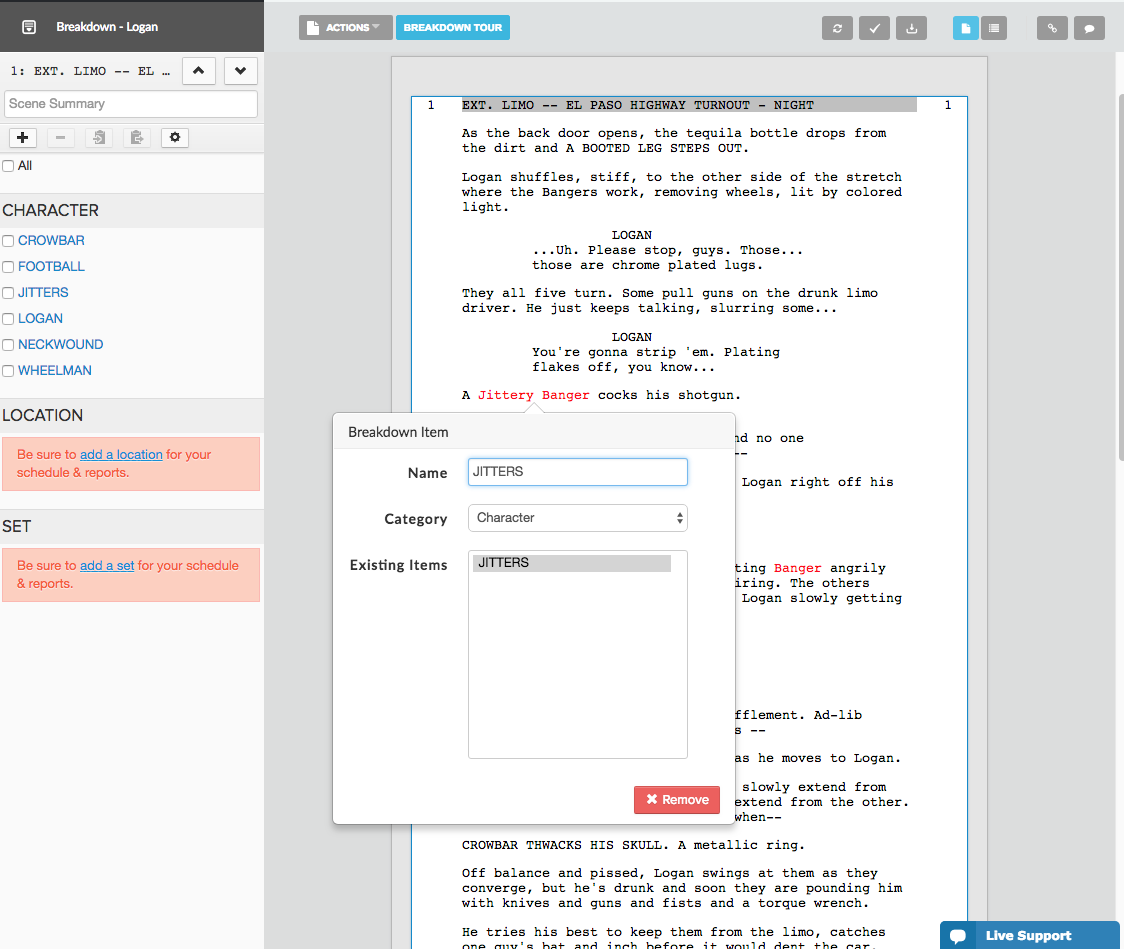 Notice that the name of the breakdown item doesn’t need to be the selected text from the script. You can call the items whatever you want! So, here we’ve tagged everyone who appears in the scene as a Character. Now we can move on to the smaller details.

We’ve established our characters, now we need to identify what they’re working with. A good first step is looking for props. Generally speaking, props include any object that an actor will interact with. In this scene, we have a lot of weapons, some of which could be construed as props initially, but are later used in the attack (i.e. the crow bar and the torque wrench). These items should be tagged as ‘Weapons’, along with any firearms. That way, your armorer could provide a rubber crowbar that can begin its career as a carjacking prop and graduate to being smashed safely over Logan’s head.

A quick scan for props gives us some automotive tools and a carjack, a tequila bottle, Logan’s keys, some loose change, a silver bullet, and a cell phone. Since this is a fight scene, the weapons list is much more extensive: multiple firearms, a crowbar, a torque wrench, a baseball bat, knives, and Logan’s famous claws. It’s acceptable to create breakdown items that cover multiple individual props when the script is not specific. In this case, the writer says that the Bangers draw guns but doesn’t say how many or what kind, so we can create a general ‘Banger Guns’ item that the armorer can sort out later. 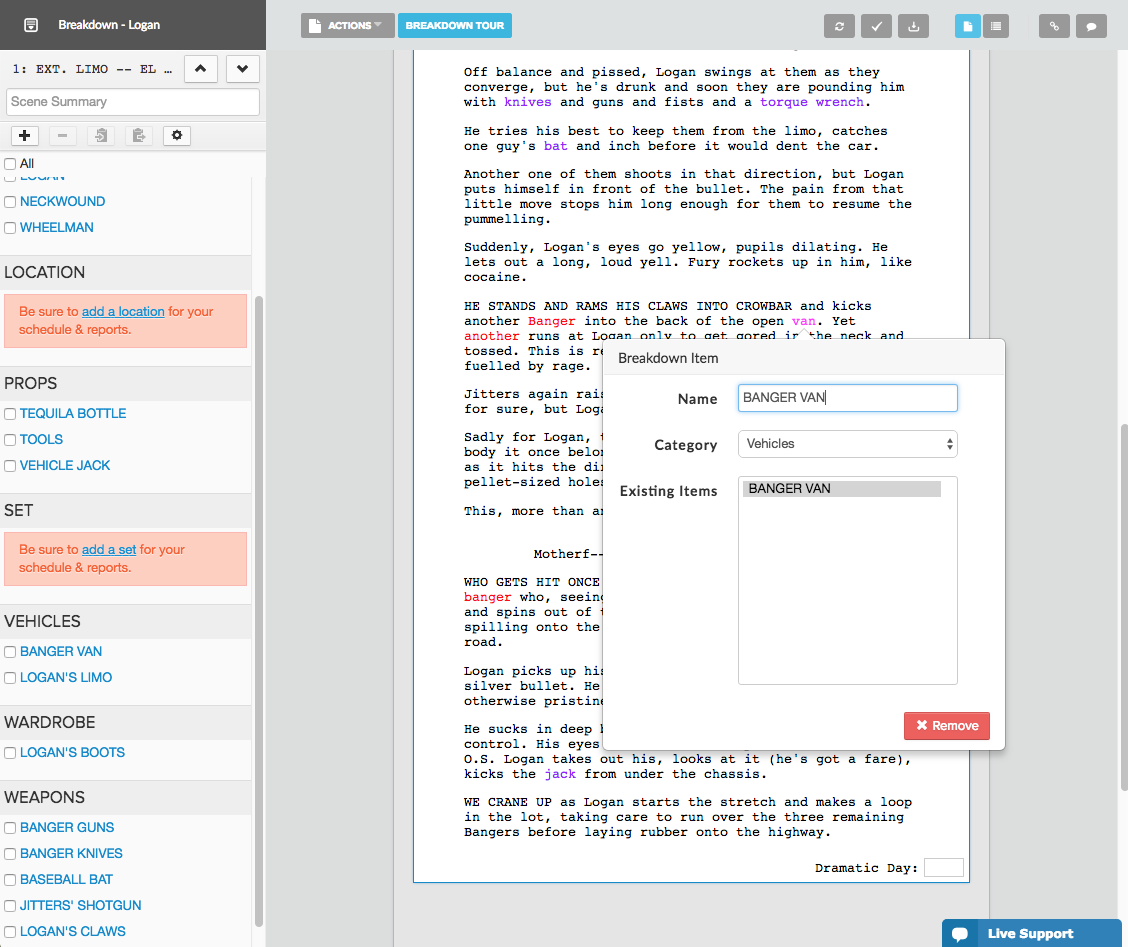 What about less rough and tumble stuff? You also need to identify things like wardrobe (what the characters are wearing), set dressing (various objects, pieces of furniture, and backdrop that help flesh out the setting), and in the case of this scene, vehicles (we have two to keep track of here: Logan’s Limousine and the Bangers’ Van). Wardrobe is not really specified in this scene beyond Logan wearing boots and the Banger’s clothing is not described at all. These things were likely established in the previous scene, and if already tagged they can be easily added to any subsequent scene’s breakdown using the plus button. Besides, this scene isn’t about wardrobe, it’s about stunts and heavy special effects!

Stunts, Effects, and Behind the Scenes

Simply put, a stunt is any action required by a performer that runs the risk of personal injury. Stunts can be something as innocuous as running to intense feats like high-flying wirework, dangerous driving, fighting, and falling. Stunts always require a Stunt Coordinator to help design plans for executing these actions safely, and usually require Stunt Performers to take the place of the actors (in some cases, actors and stunt performers are one and the same). Like effects, stunts are a process. The script may call for someone getting shot and falling through a window, but on set you’ll need a lot more than glass and a gun. You’ll need specialized blank-firing firearms, certified weapons handlers, practical effects rigs for things like squibs, safety glass, harnesses, crash pads, medics, and more.

In the case of something like this scene, which specifies a series of highly specific combat stunts mixed with special effects, you don’t need to try to identify all the elements of each stunt process – that should be done with the expert participation of your Stunt Coordinator (who can easily be brought into your Celtx Studio as a team member). If you’re doing your initial breakdown, you can make your S.C.’s job easier by breaking down each individual stunt action carefully. 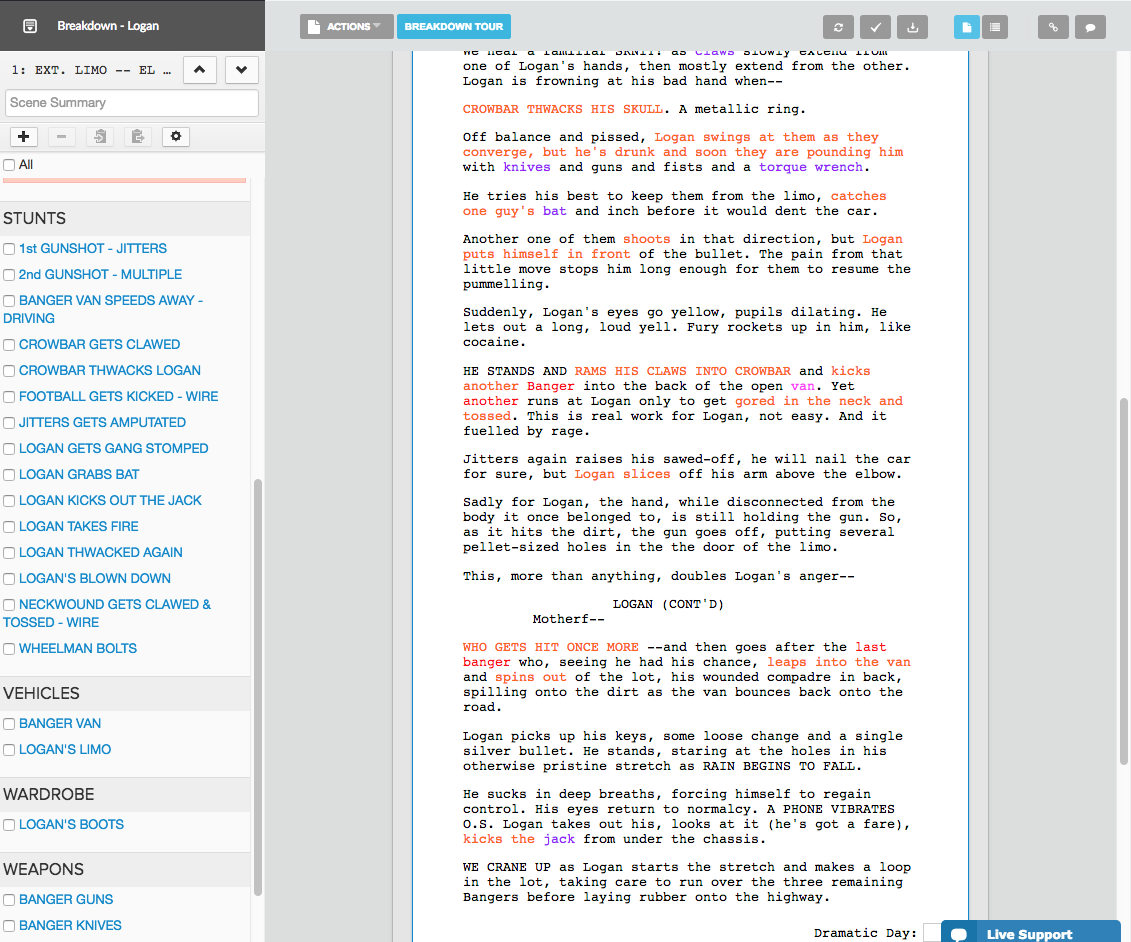 As you can see here, we’ve carefully identified every piece of stuntwork in the fight scene between Logan and the Bangers. By identifying things like number of gunshots, who is getting hit by what, and where you think some additional rigging might be required (i.e. someone getting kicked through the air), your Stunt Coordinator will more easily be able to determine what special considerations and equipment will be needed to execute the scene – and add them to the breakdown.

Of course, this is a sci-fi action piece and almost all of the stunts above require some level of integration with special effects – Logan sprouts claws, gores people, chops off limbs, and absorbs multiple gunshot wounds. Effects, put simply, is any manipulation of filmed image or simulation used to achieve something otherwise too dangerous (or impossible) to pull off practically. Our Breakdown module offers a few effects categories to choose from:

When stunts and special effects converge in the script (or any other differing elements, for that matter), you are able to double-tag text to contain two different breakdown items. For example, in our scene Logan uses his claws to chop off Jitters’ gun hand. This is a combination of a stunt and a mechanical effect, and both elements are tagged within the same line of text.

It’s not all blood and mayhem. The script also calls for some ambient effects. Rainfall, for example, is written to begin after the fight is over. Unless you’ve masterfully timed your shoot to the weather, this will likely be accomplished by a sprinkler rig (mechanical FX). Since this is a shooting script, a unique camera movement is also specified to close out the scene – so we’ve tagged a jib under the Camera category.

That’s One Scene Done – Moving On!

Our initial pass at this scene has generated a great deal of detail in terms of breakdown items. As mentioned previously, the further along you get in pre-production, more expert input will increase the size of your breakdown list. Nonetheless, with a careful eye for detail and a basic understanding of the breakdown categories, you can get a lot of the leg work done yourself.

As everything you tag during your breakdown is instantly given a unique Production Catalog entry, other members of your team can get to work right away sourcing and detailing whatever the scene calls for. Once you get on set, your schedule will automatically generate helpful breakdown sheets for every scene in your shoot: 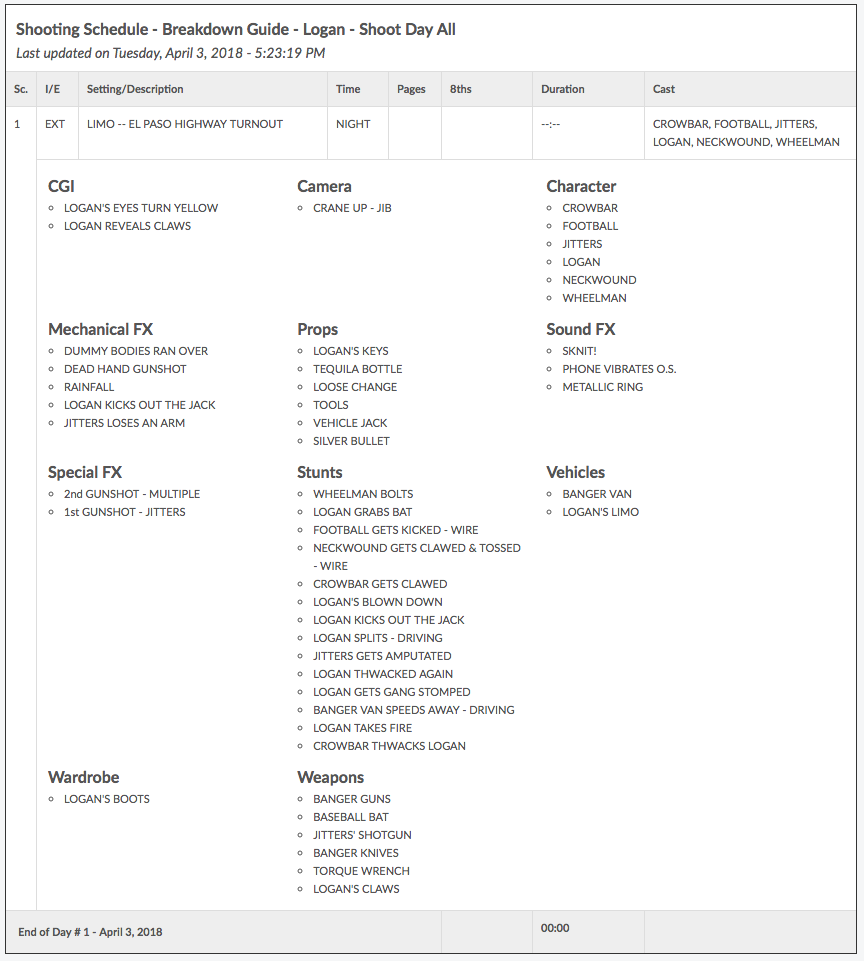 Want to prepare your script for production? Sign up for your Celtx account today and get started!

Why Is The First Episode Called a Pilot?

Screenwriter vs. Scriptwriter | What’s the Difference?

What Exactly Does an Executive Producer Do?

5 Key Differences Between a Producer and Director

The Role of an Assistant Director in Film

What is a Short Film? A Complete Guide