The winner of the $3,000 Seeds 3 Student Film Challenge is a quintessentially British one. Fetch tells the story of a forlorn audiophile and his imaginary dog as he struggles to engender a romance with a sunny barista who frequents the same overcast park as him and his illusory canine companion.

This is because the script, like every other conceptual element of Fetch was workshopped and developed collectively by each member of the crew. Such is the model of the BOVTS Film Academy, which incubated the project in association with the British Film Institute. We spoke with three members of the twenty-eight strong crew, Amy Gillies, Jack Lowe, and lead actor Isaac Moss to discuss the unique collaborative approach that went into producing Fetch, and their takeaways from the process.

The Fetch team shooting on location.

“It was such a great program with so many opportunities,” says Lowe (one of Fetch’s three directors) of the BFI program, “it’s put on specifically for young people who are interested in film production to get together and make a film.”

Gillies, who wore multiple hats on the production but focused mainly on camera operation, adds “when recruiting people onto the course, the tutors considered what roles we were all interested in so that the team could work together in the best possible way.”

Working together started early in the pre-production process. Initially, every participant in the program submitted an idea for a story, at which point the team decided as a group which idea would be the most interesting to develop. The writing team was then assembled and the script written under the supervision of three expert BFI-appointed tutors over the team’s Christmas break. According to Gillies, Celtx was instrumental in this phase.

“We all wrote collaboratively from home. It was great having Celtx as we could all write different sections, add comments, and still work together even though we were all apart with family,” she says, “In addition, this meant we could each receive feedback from our tutors who were constantly monitoring the script.”

Unsurprisingly, moving to camera offered some classic challenges for the Fetch team. 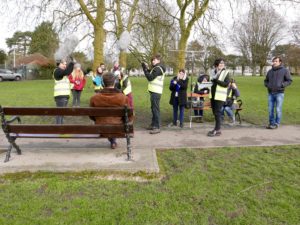 Sometimes the worst weather makes for the best shoots…

“The weather was horrific,” says Moss, “as an actor it was alright because I had people holding an umbrella to keep my costume dry and was being fed loads of brioche.”

To accommodate the collaborative approach during shooting, the script was broken down so that each of the three directors would have a part to focus on and shoot. Regarding this unusual approach, Lowe says “going into the process, I was really nervous about having to deal with a lot of very skilled creative young people, but I soon realized that everyone got along so well… we bounced ideas off each other in order to have a clear objective and theme throughout.”

The multiple-director approach was also novel from an actor’s perspective. “Having three directors was interesting,” says Moss, “but it meant each take was in some way open to a panel of directors who all gave fresh input. As an actor, there is nothing better than being told exactly what is needed from you, and my directors did exactly that.”

When asked what advice they would offer to forthcoming film students hoping to work in similar capacities, the team had this to say:

Gillies, Camera Op: “Be focused the whole day, and pay attention to where all the kit is at all times. Make sure when you are faffing over the camera that you are being picky over something important to ensuring perfect shot composition, rather than over something which could be missed. And always be fifteen minutes early!”

Lowe, Director: “Be confident in your ability but don’t be scared to ask for advice – people are often very nice. Know your actors and plan exactly what you want from your shots. If it doesn’t go to plan, be open to change.”

Moss, Actor: “Be prepared to torment yourself, to throw yourself into emotions and realities that can be both terrifyingly real and beautiful. Explore those realities, know that the words on the page are meant to be more than words. Be confident with who you will become on set and know what you are bringing to life. Most importantly, trust the direction you are given and know it will achieve the best results. There is no time to be insecure about your work – know and trust that everyone is trying to make the best movie possible.”

The Fetch crew’s pre-production and shooting experience has proved to be an encouraging one –  all three of the team members we spoke with intend to press on with their filmmaking efforts. As for their $3000 grant, the current plan is to reassemble the entire crew and make something new.

We look forward to seeing it. Check out Fetch in your studio now. 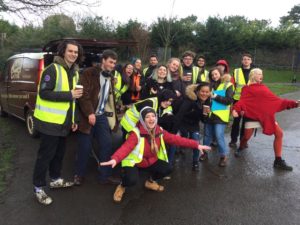 Going Virtual with the SJIWFF