We’ve talked before about the inherent commonality that exists in storytelling. Pioneering American intellectual Joseph Campbell referred to this phenomenon as the “monomyth”, the notion that all stories that stand the test of time tend to share the similar structural and dramatic characteristics – all the way from Gilgamesh to Clark Kent.

What the grandiose, sweeping archetypes of comparative mythology lacks is attention to the smaller details. In screenwriting, stories are intricately constructed from a series of self-contained moments that almost always contain two distinct elements: characters, and a setting. Unlike an epic poem, or a novel, there is no room for abstraction. Of course, what the characters do and say within these settings is what makes a script work, but examining how we choose to describe our characters (and where we choose to put them) can still offer insight into the psychology of our storytelling.

Speaking of insight, Celtx’s Script Insights tool allows you to take a look under the hood of your writing and track not only your performance, but also the components of your story itself. We recently conducted a random statistical sampling of 4,500,000 Celtx writing sessions, drawing anonymous data from roughly 84,000 distinct scripts to see what kind of patterns emerged. We discovered that when it comes to character names and scene settings, these scripts have a lot in common. 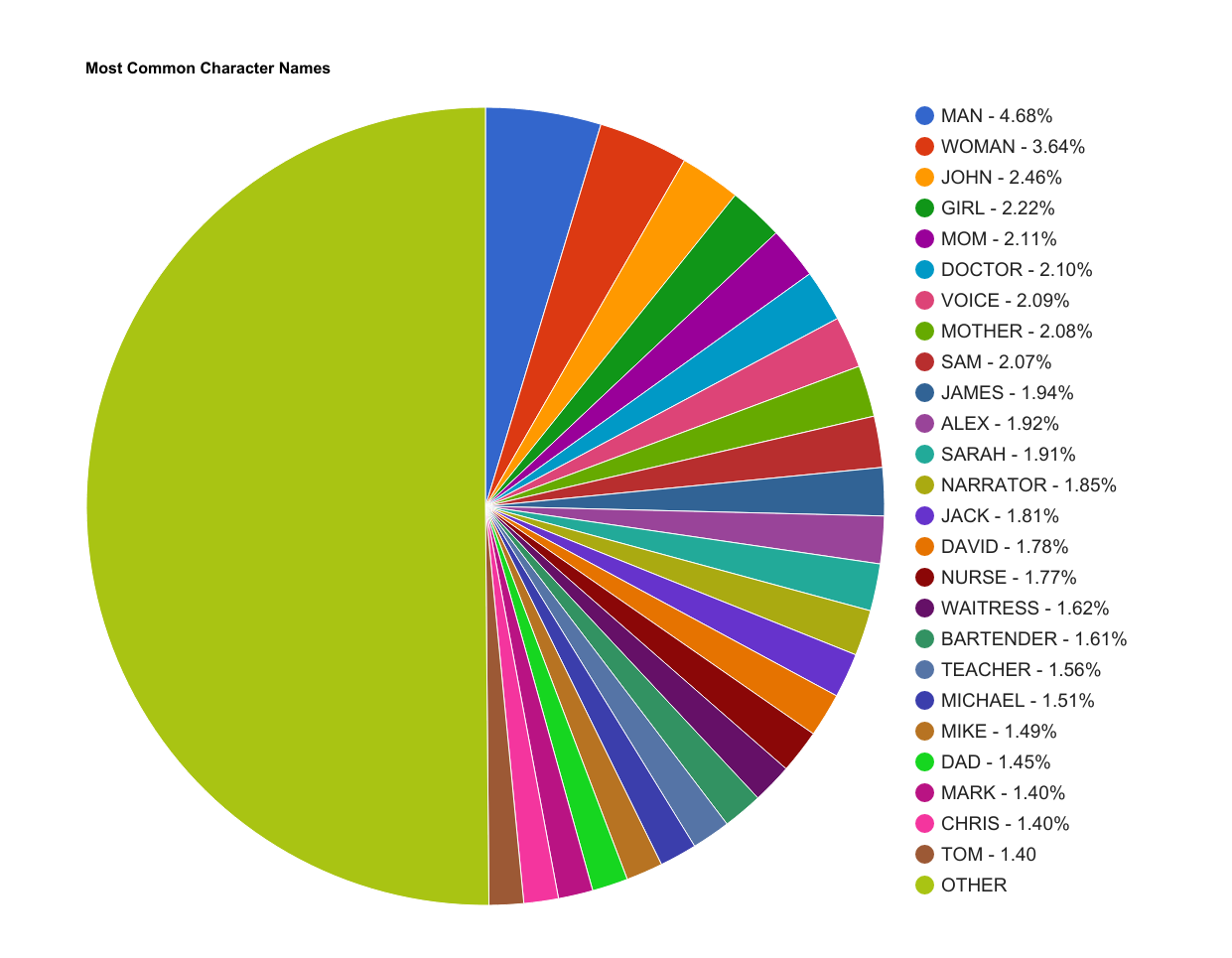 Of the 84,000 scripts, fifty percent of them featured at least one of twenty-five common character names. Unsurprisingly, the two most common names appear to be ‘Man’ and ‘Woman’.  Beyond a slew of given names (predominately male and anglicised), we see a frequent recurrence of profession-oriented stock characters: waitresses, bartenders, nurses, teachers, and doctors. No fantasy fixtures like space pirates and vampires or mythological figures like kings and wizards to be found.

The data for scene settings are remarkably similar. Of the 84,000 scripts, almost fifty percent of them featured at least one of twenty common settings. Again, there’s a fascinating mundanity to the results: the most common scene setting is in a kitchen, followed by a bedroom, a living room, and a car. Places like hallways, bathrooms, bars, hospitals, restaurants, and parking lots flesh out the rest.

So, what does this data tell us as screenwriters and storytellers? Perhaps it’s that even in an era where tentpole genre spectacle makes up the majority of the entertainment we consume, people still want to tell stories about what they know.

Familiarity can be an asset. After all, it is the tableau of the everyday world that we find it easiest to connect with on an intellectual and emotional level. It’s in places like kitchens, cars, doctor’s offices, and bedrooms where most of the real drama, comedy, romance, and horror of life unfolds, and it’s people like nurses, bartenders, and teachers that make up our supporting cast. Whether you’re writing a feature film or an advertisement, the less you require your audience to suspend their disbelief, the more effective your story will be. All the world’s a stage, as the saying goes, and inspiration can come from anywhere.

Want to use Insights to help you take a deeper look at your writing? Subscribe to a Story Development plan and keep yourself organized, informed, and motivated as you take on your next project. Maybe you’ll even earn a few badges.