The year is 1916: radios have become small enough to be conveniently stored indoors, the skies are thick with zeppelins, and all across America the moving pictures have captured the public imagination. While throngs of would-be stars are making their way to Hollywood or New York to take their stab at the silver screen, an equally lucrative field has opened up for those who dream of crafting the stories that keep the nickelodeons running – that of the “photo-playwright.”

This is the world presented by Carl Charlton in his pre-Depression manual How To Write Photoplays. It seems that the more things change, the more they stay the same (except for all the zeppelins). The book is a brisk, fascinating read that offers an impressively relevant perspective on writing for the screen.

So, to kick off the new year, we’re rolling the clock back by a little over a century to  see how some old-timey screenwriting advice matches up with ours, and to provide you with four useful pointers you can keep in mind when scripting your next photoplay (or “movie”, if you’re hip to the new slang).

“Certain authors advise the use of systems – matter of fact card indexes – for keeping track of the plots that have come to them, jotting down brief incidents they have culled from newspapers, magazines, books, experiences of their own, or of their friends, even saving newspaper pictures and photographs.”

Sound familiar? We’ve long advocated using index cards to help you structure your story – that’s why we’ve built them into your Studio. Charlton suggests going even deeper: “store up all the material you possibly can” and create a set of cards specifically for organizing moments of inspiration and ideas for multiple stories.

Probably true, but seems a little heavy. We’ll leave that part up to you.

“There are certain technical terms which must be understood by the writer of “movie” scenarios.”

Screenplays in Charlton’s era looked very different from the ones you’re used to reading and writing. They utilized a different (and unstandardized) format and tended to be much shorter. Most importantly, they are purely visual – films with synchronized sound (or “talkies”) would not enter the mainstream for another decade. 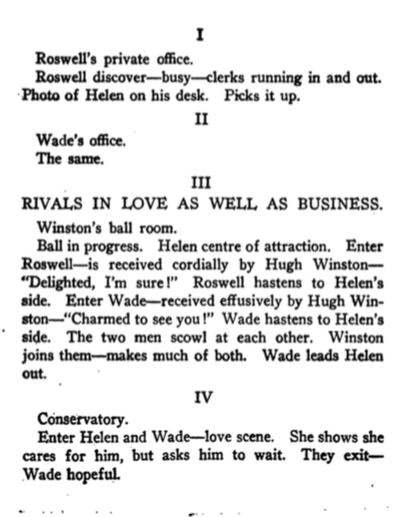 Therefore, the formatting terminology he uses is largely obsolete or has taken on different meanings. What we’d call a “close-up” is referred to as a “flash”, “cut-ins” refer to title cards,  flashbacks are called “visions”, and “registers” prescribe facial expressions.

Archaic? Sure. But the point here is that knowing screenplay structure and understanding how to properly implement the various elements involved is key to making your script cogent and presentable. Celtx does a lot of the work for you in this respect, but you can learn how to master the finer points with this article.

“Brevity is the great desideration – for the scenario editor has many manuscripts to read, and is an expert in his line, so that he can grasp a story or scenario readily. Furthermore, condensation prevents confusion, and there is no use, in fact it is a detriment, to put anything in a scene that cannot be readily understood. For time is precious in the photoplay, to the scenario editor and to the producer, alike.”

It would appear that the adage of “show, don’t tell” was true even before screenwriters had the option of flooding their work with expository dialog. Always remember that you should only be describing the fundamentals what people can see (and hear, if you’re one of those fancy 2017 types with access to microphones).

There’s a little room in a script for florid descriptions. This isn’t to say that your writing has to be sparse or plain, but if you can’t describe a setting or piece of action in four lines or less, go back and try again. If you feel that you need to break rules like these, at least try to bend them first. For some more pointers on how you can keep your script prose tight and effective, check out our guide to writing action.

“In every scene in every photoplay there must be a crisis – that is, a point of interest to which the scene leads up. And to be effective, the scene must stop at the crisis, not go beyond it or the spectator will not appreciate the climax.”

Whether in 2017 or 1916, the fundamentals of storytelling have never really changed. Regardless of the medium or genre, every piece of narrative art is subject to the same inherent expectations. Think of it like music: hitting the right notes at the right time is crucial to keeping the audience engaged, invested, and wanting more. If your story doesn’t at least attempt to commit to this structure, you will find it difficult to keep people’s attention – or elicit the kind of response you’re aiming for.

There are several interpretations of what the traditional three-act story structure is composed of. We’ve published our take as a helpful infographic to assist you during your writing process.

Your writing process is exactly that – yours. There’s a vast arsenal of tools and techniques at your disposal, but how you decide to use them is entirely up to you – what works for most doesn’t work for all, yet there is something to be said for the fact that the screenwriting advice proposed by Charlton back when film was largely a novelty still rings true today.

Make no mistake, we’re not stuck in 1916. Your Celtx Studio provides an integrated suite of writing and story development tools designed to make creating your next script as intuitive and seamless as possible, no matter how you choose to approach it.

By the way, if you’ve got a script that you think is ready to gain some exposure, Charlton suggests binding it in leather and mailing it flat with self-addressed stamped envelopes enclosed to the American Film Manufacturing Company in Santa Barbara, California. When your script is returned because that particular company was dissolved in 1921, maybe you could consider uploading it to the Celtx Exchange. We can guarantee a better result.