Halloween! It’s that wonderful time of year when darkness descends across the land and the veil between our world and the next is at its thinnest. In between dressing up as the previous year’s pop culture sensations and carving jack-o-lanterns to ensure a bountiful harvest, the Halloween season is also a great excuse to watch as many horror movies as possible before we’re all subjected to the endless cavalcade of Christmas films that herald the beginning of winter.

As script consultant extraordinaire Carson Reeves puts it, “Horror is the easiest sell in the business. It’s the quickest way to break in as a screenwriter… the horror genre is a river with hundreds of tributaries. There’s a path for everyone as long as you’re willing to take the ride.”  We’ve talked about horror movies here on the Celtx blog before, specifically the techniques that they employ to scare us, and why we’re willing to pay for the experience. This time around, we’re going to take a closer look at the screenplays that inform these exercises in dread and offer some takeaways that you can keep in mind should you wish to take a stab at the genre (pun intended).

So, without further ado, here’s some conclusions we drew from re-reading five of our favourite horror scripts and analyzing them with our ever-illuminating Script Insights tool. Enjoy! The Breakdown: If you’ve ever wondered why there have been so many zombie movies released over the past fifteen years, look to Danny Boyle’s wholly unexpected 2002 Brit-horror hit. Visceral, low-fi, and hyper-kinetic, 28 Days Later reinvented and reintroduced the zombie genre for the digital age with claustrophobic, queasy realism and very modern anxieties.

The Lesson: Subversion of expectation is fundamental to a scary story, but it shouldn’t be limited to telegraphic jump scares.

Alex Garland’s script subverts everything about the zombie genre, and lays out its cards with confidence right out of the gate. He takes the Romero tropes of shambolic walking corpses and gradual societal collapse and gives them a callous shot of adrenaline: the protagonist quite literally wakes up in a world that has been destroyed. The infected aren’t dead, and they are far from slow. They don’t want to eat you, they just want to kill you. As a bonus, if you get bit, there’s no time to disguise it. You have twenty seconds tops before you’re little more than a rabid animal.

At the time it was written, 28 Days Later was the antithesis of everything people knew to expect out of a zombie movie. It wasn’t about trying to barricade yourself against the horror of the outside world, it was about running like hell. If you can find a way to take a well-established element of horror and turn it on its ear, you’ll already be ahead of the pack.

It Follows by David Robert Mitchell The Breakdown: Writer-Director David Robert Mitchell’s 2014 indie-horror breakout is guaranteed to linger in your imagination. On paper, the plot synopsis is so far out of left field that it seems almost comical: a suburban teen is slowly stalked by a relentless, shapeshifting, sexually-transmitted entity that is only visible to its intended target. In practice, however, the effect is downright chilling. It Follows is a masterclass in tension, both on the page and on the screen, putting the threat of unstoppable, impending doom in exclusively placid and familiar environments. You can’t run, you can’t fight, and you can’t hide – you can only keep your eyes peeled.

The Lesson: Exposition is not a necessity, but rules are.

The monster in Mitchell’s script is something so original and high-concept (and frankly bizarre) that any attempt to explain its origins or motivations would almost assuredly shift the tone of the story from frightening to absurd. The best fantastical horror creatures are effective not because we know where they come from, but because we know what they can and cannot do. In It Follows, ‘It’ has a very clearly defined modus operandi as soon as it is introduced, making the abstract game of cat-and-mouse that ensues easy for the reader to project themselves into. When your audience is buying into the inexplicable, you’re doing your job. 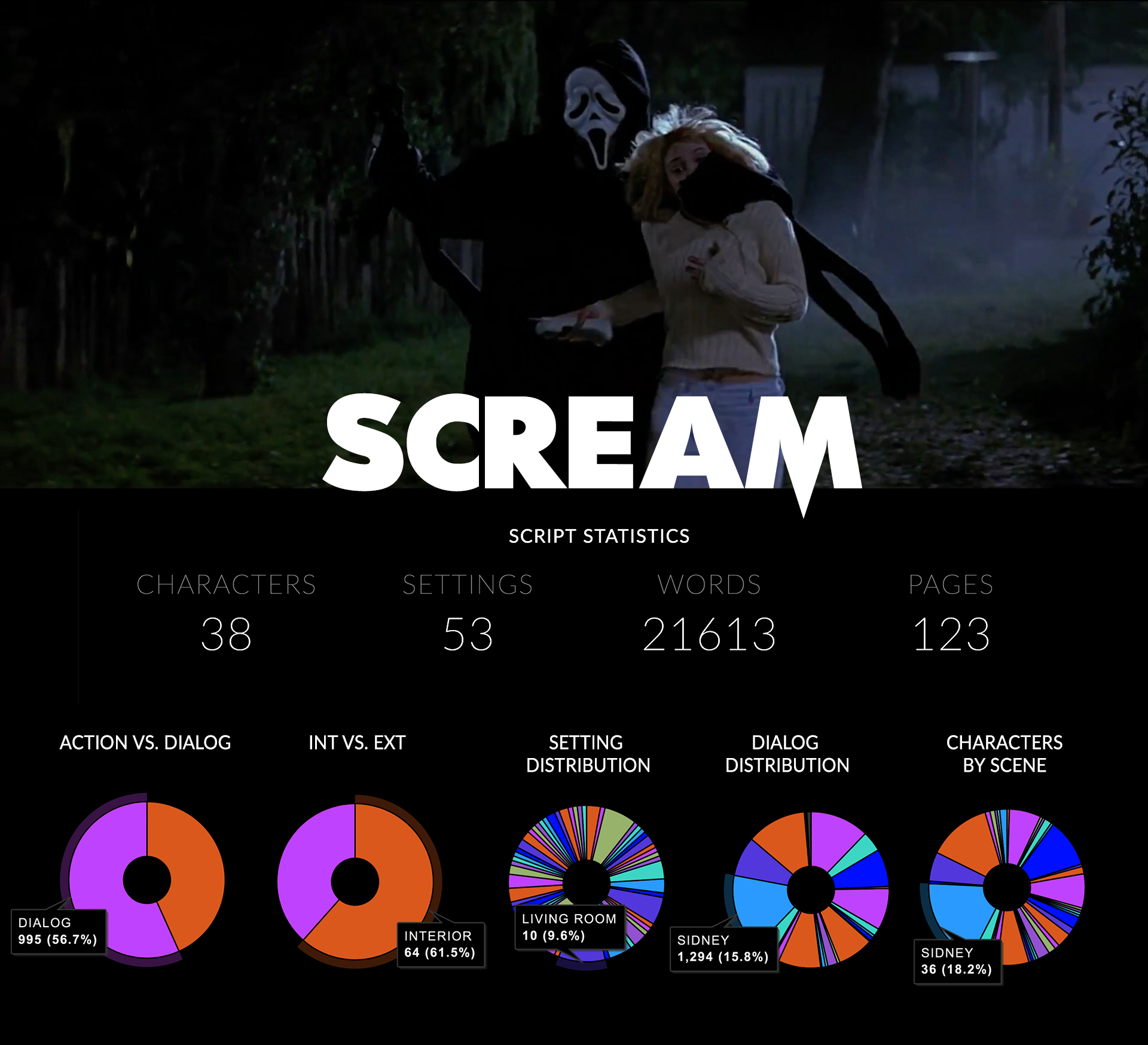 The Breakdown: In the 1980s, slasher movies were a cinema staple and a goldmine. For the average moviegoer who came of age in those freewheeling days of R-rated studio films for teenagers, horror was essentially synonymous with Jason Voorhees, Michael Myers, and dozens of other second-string murderers who specialized in systematically butchering teens at summer camps, amusement parks, boarding schools, and so on. These movies grew increasingly mundane, predictable, and rigidly formulaic, eventually falling out of favour in the 1990s. When Wes Craven’s Scream debuted in 1996, they came roaring back into the pop culture lexicon with winking Gen-X self-awareness: “What’s your favorite scary movie?”

The Lesson: Don’t be afraid to poke fun.

Scream made good on its promise of scares, but the heart of the script is its obsession with the tropes and overall silliness of its genre canon: the characters become gradually aware that they are in a slasher scenario, eventually using their knowledge of clichés to turn the tables in their favor. Scream‘s massive success goes to show that you can make fun and have fun with the more tired aspects of the horror genre without descending into farce – you just need to know and love what you’re satirizing.

The Exorcist by William Peter Blatty 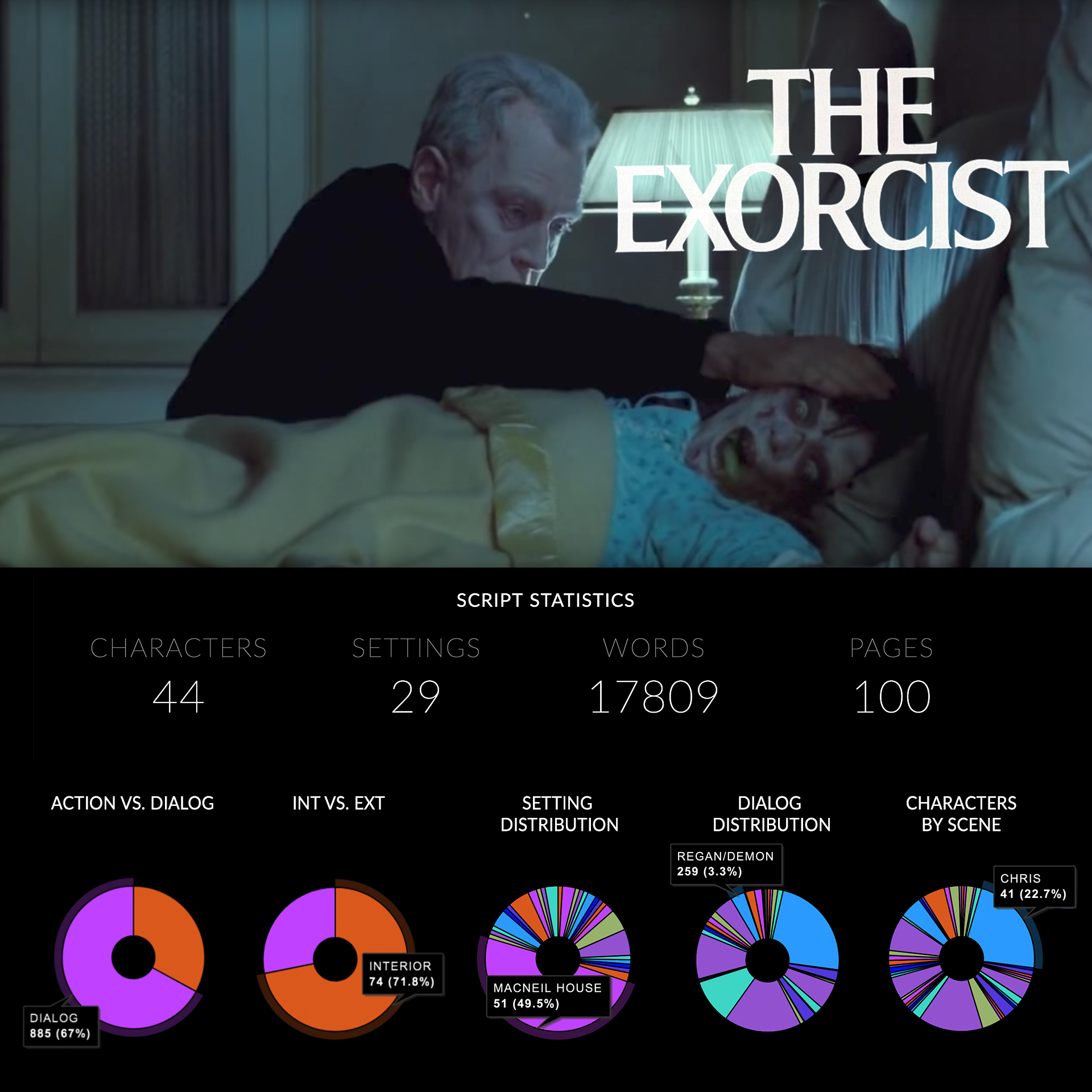 The Breakdown: The Exorcist might be the most controversial Hollywood horror movie ever made. Directed by William Freidkin and written by William Peter Blatty (thankfully adapting his own novel), The Exorcist took the world by storm in 1973, a recipient of moralist scorn, critical acclaim, and box office success. Its grotesque special effects and harrowing depiction of a demonically possessed child shocked audiences and left an indelible influence that can still be seen in supernatural horror to this day. There’s been countless attempts to replicate the masterful tone of The Exorcist, but few have succeeded in approaching its incredible confluence of earnest, humane drama and spiritual dread (including its own sequels).

The Lesson: Horror can have a heart.

What makes the script for The Exorcist so distinctive is that it is largely a meditation on faith, death, and maternal love – it could arguably make for a compelling drama even with the spinning heads and projectile vomit removed. There’s a great deal of emotional pain in these characters, and it becomes clear that the real monster in the story is the hopelessness that surrounds them. The big moments of demonic horror are few and far between, and that’s fine.

The Strangers by Bryan Bertino The Breakdown: The Strangers was among the first of a slew of low-budget independent horror films that were produced over the past ten years that turned huge profits. The concept is simple: a young couple undergoing a rift in their relationship go to spend an evening at their summer home. Thrill-killers show up. It’s an unpretentious premise that harkens back to classic 1970s American exploitation, while distinguishing itself with subtle, believable characters and the not-so-subtle influence of New French Extremism in the form of punishing, nihilistic violence. What’s scarier than people who want to kill you for fun?

The Lesson: Small can be scary.

Bertin’s script is tight as a drum – the two protagonists don’t talk that much, and virtually the entire story takes place within the confines of a tiny rural property. Unlike the other scripts we’ve reviewed in this article, The Strangers frequently goes for pages without a single word being spoken – the reader is as trapped as the characters. It’s a great example of how good horror writing can make tiny, fleeting details into towering threats: a reflection in a mirror, a shape in the darkness, or a shadow creeping across the wall.

Want to see your script broken down into those neat little graphs? As a Celtx subscriber, the Insights tool is ready for you to use in your Studio’s script editor. It’s a great way to get a snapshot of how your story is taking shape and track your writing performance. From all of us here at Celtx, have a safe and happy (and spooky) Halloween!