Perspectives: Music Videos on a Shoestring

Our Perspectives series brings unique insight on the production planning process straight from the source: our customers. For the inaugural post, we spoke to Cody Westman, an independent musician, filmmaker, documentarian, and commercial video producer based in Newfoundland, Canada about how he approaches executing music videos for local bands – without a lot of money.

Celtx: How long have you been in video production?
Cody: I’ve been in the biz since ‘99, but I was always an extra or a PA. Finally started shooting, directing, and editing three years ago when I bought my own camera.

Celtx: Did you do any schooling or did you learn in the trenches?

Cody: Most everything I learned online, or the hard way: by making mistakes on a shoot. Three years ago, I told a friend of mine, who is a successful producer in Vancouver, that I wanted to go to film school. He said that “people don’t care about your credentials – they care about the quality of your work. If I was you, I’d take the $20,000 you’ll spend on school and put it into a film.” Great advice.

Celtx: What kind of budgets and crew size do you usually operate with?

Cody: VERY small on both fronts. The last one we shot was three people – one camera operator, one lighting technician, and myself directing and shooting some. Of course, it’s nice to have more people to help with the load and let me focus more on the monitor. 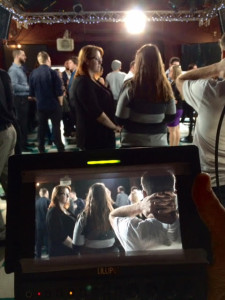 Celtx: What is the planning / pre-production phase like for a music video? How do you approach it off the bat?

Cody: I listen to the song first and make sure I like it. Listen to and read the lyrics. Usually ideas just come to me. I bring them to the band, let them weigh in on it, make some changes, and then we have a solid concept.

Celtx: Do you plan around locations/equipment/people that you know you’ll have access to, or make the concept the centre of your planning and make it work from there?

Cody: I like to think we can shoot anything I think of, but sometimes you have to work within your means (and your budget). There’s a lot of begging and borrowing going on, but no stealing!

Celtx: What’s the process for shooting the band themselves playing the song? What notes do you try to hit? (No pun intended)

Cody: It’s important to have loud playback so they can hear themselves over the drums, and let them feel like it’s a rock show. It’s also a  good idea to have a 4 beat count-in at the start of the song so you can line up everything quickly in post.  Use soft pads on the snare (if it’s not in the shot) so it’s not too loud on set -s aves everyone’s ears.  And then, make sure people are playing with the right feel that is intended.

Celtx: How do you lay out your visual plan?

Cody: Shoot the master first. Start wide and work your way in, both for lighting and for other things that might be in the shot, like gear boxes. Then do some takes of each member separately. Then inserts, like props or amps or whatever. 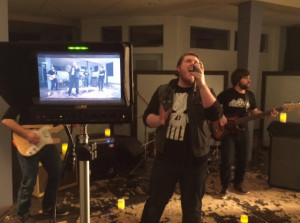 Celtx: Do you think it’s important for music videos to incorporate strong visual hooks? It seems some bands are more well known for their videos than their music.

Cody: Definitely need strong visual hooks! Look at OK Go, they have fantastic music videos.  Concepts that stay with you forever, like the recent one they did in zero gravity in a plane. Awesome.

Celtx: There are a lot of very prominent directors and production houses that gained their momentum producing music videos. Why do you think that is? Is there something about the format that spurs ingenuity?

Cody: I think having music behind any concept gives it instant life, a different perspective.  Two worlds colliding to make one common thing.  Also, if the band is popular, in this age of social media, the filmmaker’s work gets shared with thousands of people quickly, and helps to get noticed.

Celtx: Any words of advice or tips for a team that’s about to tackle a low budget music video?

Cody: Slow motion looks cool and takes up screen time if you’re on a budget. Just look at TV ads, it’s everywhere! It also goes a long way to have a hot meal, especially when people are working for free. Have fun with it!

Celtx: How has Celtx helped to improve your production process?

Cody: I’m using it right now for a film I’m shooting in April! So easy to use.  It’s an easy way to dive in from a concept that’s in your head and within an hour have something professional on paper. It’s very intuitive. Seems like the next thing I need is right there.